What started as a Saturday job for Nelly Keen at school has turned into a career she loves – thanks to an apprenticeship.

Now in her fifth year working at Applaud Coffee in the Saints area of Ipswich, the 20-year-old has competed all her training and when the shop is able to re-open, she will start in her new supervisor role.

Telling her story for National Apprenticeship Week, Nelly urged other young people who don’t want to go to college to take up the opportunity of on-the-job training. “I never really got on with academic learning at high school and the thought of going to college was a bit intimidating,” she said.

“I feel a lot of people look down on apprenticeships and don’t think they are a good thing, but I wouldn’t change what I did for anything.”

Nelly was just 16 and still at school when she started working a few hours at the Grade II listed shop on St Peter’s Street in June 2016. Initially she was collecting trays and washing up, but she quickly developed a passion for the world of coffee and arranged to go on a course in London.

Owners Hannah Huntly and Beth Cook could see she had plenty of promise and with the support of Government funding, Nelly began an apprenticeship when she was 17.

She worked 30 hours a week and learned in the shop, achieving her Level 2 Hospitality Team Member Apprenticeship. Her training covered everything from serving food and drink to customers and handling payments to using a specialist coffee machine.

She was guided and supported through her training by hospitality assessor Andrea Thompson from Suffolk New College School of Commercial Services, as well as Hannah and Beth. 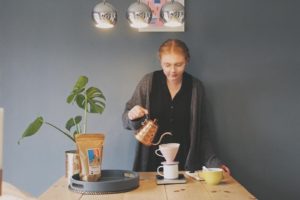 Completing her apprenticeship in September 2018, she has continued to develop her expertise as a barista and along with Beth she did receive some training from six times world Latte art champion Dhan Tamang.

Beth and Hannah have recently been training Nelly to supervisor level and she hopes to put it into practice when restrictions ease and the café can reopen. During lockdown, Nelly has been sustained by the coffee machine she has at home and kept busy creating content for the shop’s Instagram account.

Asked where she sees her career going, she says: “I would like to have my own place at some point, but I definitely want to stay in the specialist coffee industry. It’s what I love doing and I am so lucky to have found that so early in my career.”

Applaud Coffee became a New Anglia Youth Pledge Marque holder in October 2017. The Pledge is the New Anglia Local Enterprise Partnership’s commitment that every young person in Norfolk and Suffolk will get the support they need to get into education, training, an apprenticeship or a job within three months of leaving education or employment.

Natasha Waller, Skills Manager at New Anglia LEP, said: “Nelly’s story shows that not only do apprenticeships offer on-the-job training, but they can lead to a career that you really enjoy. Beth and Hannah have also benefitted as they have been able to develop and retain someone whose skills are now valuable to their business.”

The Low Carbon Innovation Fund (LCIF2) is seeking to make new investments of £25k and over into businesses who are developing innovative products and technologies that will make significant reductions of greenhouse gas emissions.

Work is nearing completion on the new £16m Cefas (Centre for Environment, Fisheries and Aquaculture Science) headquarters in Lowestoft and its opening is scheduled for winter 2021. The facility will provide a centre for applied science, commercial space, refurbished laboratories and new offices, and delivering a fit-for-purpose marine science facility that will secure Cefas in the region for the next 40 years.